RebuildingtheFoundations.org does not receive any personally identifiable information from the search bar below.

I use this newsletter to send Bible studies as much as once per week, sometimes less, but never more. See back issues.

AV (how it's translated in the King James Version and how many times): fiery serpent 3, fiery 2, seraphim 2

If this is a seraph, it's a fallen one! 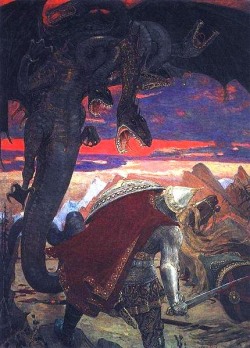 Boy, was I surprised when I finally decided to look up those heavenly beings from Isaiah 6:2-6.

In fact, they're serpents with wings and feet. I'm pretty sure that qualifies them as dragons!

I am aware that the immediate reaction of most conservative Christians will be to take offense, assume I'm attacking the Bible, or write off this page as nonsense and me as a kook.

Stop for a moment, though, and look at the definition in the text box above from the respected Strong's Exhaustive Concordance. You'll find all Hebrew lexicons give a similar definition because Isaiah 6 is not the only place that the word "seraphim" is used.

It's just translated as snake all the other places.

The Scholarship Behind This Translation

I've heard it said that this is all they do (shout this 24/7), but that's not true. When Isaiah was stricken with conviction from being in the presence of the Lord, it was one of the Seraphim who touched his lips and said, "Lo, this has touched your lips. Your iniquity is taken away, and your sin is atoned for."

A Helpful Reader Expounds on Seraphim

I think this qualifies as at least a small defense of modern translators. This comment by a reader on Seraphim is useful.

I appreciate your interest in Seraphim. I too have been studying this recently to discover if there are links to Gen. 3. So far they are only "inferences" that Satan may have been a Seraphim, who appeared as a serpent. Nothing concrete.

On Isaiah though, I think one of the reasons translators have "hidden" the definition as 'serpent' for "Seraphim" is because there is a variant issue. Jewish and Christan translators alike struggle with knowing for certain if the 'serpent' root is accurate or the root for 'fiery' is accurate. Rather than box us into a moot theological point—they may have chosen to simply leave it up to those who really want to dig to discover.

But to your point, it would be nice to have a note that says, "root uncertain—could be translated fiery or serpent—either way heavenly beings that surround the throne of God in worship and service," or something to that effect. :-)

I would add that it would not only be nice to have such a note; it would be honest. Not having it is dishonest.

I finally decided to look these beings up. Here's the simple facts …

Now I have no way of knowing what you think about dragons in heaven, but to me, that's one of the most interesting things I've ever discovered.

Tell me you don't like dragons! Apart from a Christian context, everyone loves dragons!

But why not in a Christian context?

Do dragons have anything at all to do with Christian theology? Why can't we have dragons in heaven? Why should they be offensive to us?

Why Didn't Anyone Tell Us?

You might be interested in Honest Bible Translation, my rant about the dishonesty of Bible translators withholding information from us.

This article has been reprinted a number of places on the internet. All but one or two give me credit for the reprint, though none have actually asked for permission.

I wrote "Seraphim: Dragons in Heaven" for my Christian History for Everyman web site. All other occurrences of this page on the internet are copies. I don't really object to the copies, and almost all of them give me credit. I once got a request for permission to print this page for a Sunday school class, which I granted.

Where to Go from Here

I reserve all rights, but I give permission to use this page in Bible studies or other FREE ways. You may copy, but not sell this information.

All references to "writings from the apostles' churches" or "early Christian writings" on this site can be read at EarlyChristianWritings.com or Christian Classic Ethereal Library, as well as other web sites.

Finally, for those that do not know, copyright allows "fair use" of all written works. In general, you are always free to use a paragraph or two from anyone's work with attribution. How much further than that you can go has never been defined by law.